We study host-parasite interactions from both perspectives, using model hosts. Our interest is in how hosts recognize and initiate an immune response to parasites and how parasites evade and/or suppress immunity.  Our investigation of immune modulation by parasitic nematodes has led us to become more focused on biochemistry. We are studying which proteins are released by parasitic nematodes and are working to identify their targets (Lu et al. 2017, PLoS Pathogens; Chang et al. 2019, PLoS Pathogens). We also study parasite host-seeking behavior and olfaction using parasitic nematodes.

From the host perspective we study how nematode parasites are recognized and the immune response that follows. To do this we use a variety of insect hosts. As part of this work we study host immunity generally using bacterial pathogens, nematode parasites, and other immune insults such as cancer. In studying immunity we have become increasingly interested in lipids and lipid signaling.

I. Host-Parasite interactions (the parasite)

A. Parasitic nematodes are often asymptomatic and cause little pathology to host. We are interested in understanding how nematode parasites evade and/or suppress the host immune response. Currently we are investigating the protein secretions of EPNs and exploring their effects on host immunity (Figure 1). We have found that Steinernema carpocapsae and S. feltiae IJs release a diversity of proteins when they initiate active parasitism, and that these proteins are toxic to a variety of insect hosts (Lu et al. 2017, PLoS Pathogens; Chang et al. 2019, PLoS Pathogens). Now that we have identified hundreds of proteins released by parasitic nematodes, we are interested in characterizing some of these proteins and identifying which of the proteins in the nematode arsenal cause damage to the host and which are involved in modulating host immunity. This work is largely biochemical and relies on our ability to produce recombinant versions of these proteins to work with. We are also using Drosophila melanogaster as a model host. This allows us to produce transgenic flies that express nematode effectors.

Figure 1. Activated infective juvenile nematodes release proteins and small molecules into the host. While hundreds of these proteins have been identified in many different species of nematodes, few have been studied in mechanistic detail. We are interested in performing functional analyses of these effector proteins.

B. We study parasite host-seeking behavior and olfaction using parasitic nematodes. We use entomopathogenic nematodes (EPNs) as a model system (Figure 2). The active host-seeking and host-invasion behavior of EPNs resembles that of many human-parasitic nematodes, making them excellent models for human parasites. EPNs are also of interest as biocontrol agents for insect pests and disease vectors. Our research shows that different EPN species respond differently to the odor blends emitted by live hosts as well as individual host-derived odorants. We showed that EPNs rely on the general host cue carbon dioxide (CO2) as well as host-specific odorants for host location, but the relative importance of CO2 versus host-specific odorants varies for different parasite-host combinations and for different host-seeking behaviors. We also identified host-emitted odorants by GC-MS and found that many of them stimulate host seeking. These results demonstrated that EPN IJs have specialized olfactory systems that contribute to host selection (Dillman et al. 2012, PNAS). We are continuing to explore how nematodes make behavioral decisions and would like to understand the kinds of odorants used to inform these decisions. We have identified several odors produced by waxworms infected by EPNs (Baiocchi et al. 2017, Scientific Reports), and we have identified genetic pathways involved in the response of the parasites to certain odors (Baiocchi et al. 2020, GENETICS). 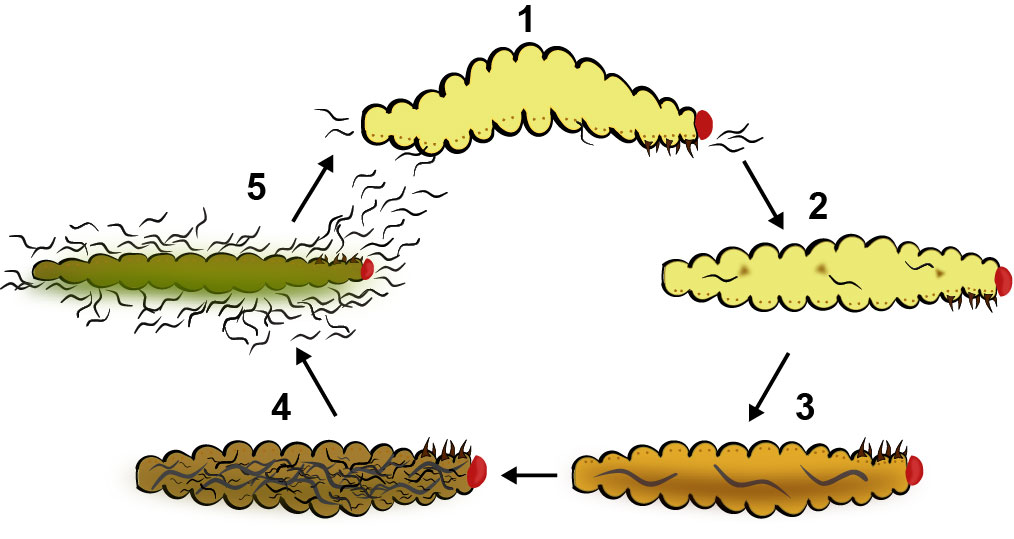 Figure 2. The life cycle of entomopathogenic nematodes. 1) The IJ stage is a developmentally arrested third larval stage and is the only free-living stage; all other stages exist within the host. These free-living IJs find a host, enter usually through natural openings, and initiate parasitism inside the hemolymph. 2) EPN IJs release their bacterial symbiont into the host hemolymph and together, both the bacteria and the IJs release toxic molecules into the host to kill it. 3) The nematodes develop and feed on their growing bacterial symbiont and liquified insect tissues. 4) Nematodes reproduce, potentially going through 2-3 generations, depending on the size of the host and number of nematodes that initiate the infection. 5) When the population density is high and resources begin to deplete, new IJs develop and disperse, carrying the symbiotic bacteria to new hosts.

We study how hosts recognize parasites and the immune response to parasitic infection. As part of this work we study host immunity generally using bacterial pathogens, nematode parasites, and other immune insults such as cancer (Dillman & Schneider, 2015, Cell Reports).  In studying immunity we differentiate the relative roles of resistance, the ability of the host to reduce or eliminate pathogen burden, and disease tolerance or the ability of the host to manage the effects of infections.

Although many EPNs are reported to have broad host ranges, Steinernema scapterisci is thought to be a cricket specialist. It was discovered as part of a 1980s effort to find natural enemies of Scapteriscus mole crickets that could be used in Florida to control invasive mole cricket populations. We study the interactions of S. scapterisci with its known natural host, Scapteriscus borellii (Dillman et al. 2014, Environmental Entomology). We have found that mole crickets and sand crickets are particularly resistant to infection by EPNs or by the symbiotic bacteria they carry (Aryal et. al. 2017, J. of Invertebrate Pathology; Aryal et al. 2019, J. of Invertebrate Pathology).

We have some videos of the nematodes we work with and some of the assays we use up on our youtube site: https://www.youtube.com/user/Wormherder