Congratulations to Dr. Meera Nair and her lab on their recent NIH grant focused on how RELM-α-expressing macrophages mediate host disease tolerance in mucosal infection. The proposed work will be done in collaboration with the Nordgren and Dillman labs at UCR. We’re excited to be spending more time working with the rat parasite Nippostrongylus brasiliensis. We’re also pleased to be extending our collaborative work with Dr. Nair and her lab; this is the third NIH-funded study that we will be working on with Dr. Nair.
(https://news.ucr.edu/articles/2020/05/21/scientists-study-how-lungs-respond-worm-infections).

A collaborative study performed by graduate student Tiffany Baiocchi and honors undergraduate student Lauren Braun was recently published in the Journal of Nematology. Previous research had shown that the proportion of Steinernema carpocapsae IJs participating in host-seeking behavior is significantly increased after stimulation by physical contact with host cues. In this follow-up work we found that such physical stimulation results in a three-fold increase in participation by IJs. This effect seems influence the response of nematodes to host-specific odors rather than being a general increase in chemotaxis. Congratulations to Tiffany & Lauren!

Entomopathogenic nematodes (EPNs) are a special guild of insect-parasitic nematodes. What sets them apart from other insect-parasitic nematodes are their ability to rapidly kill their host, and their use of bacteria to facilitate their lifestyle. There are an increasing number of species descriptions that include new species of EPNs, even when the newly described species is not in fact an EPN.  A recent study on how to differentiate between EPNs and scavengers was recently published. This work was done by Tiffany Baiocchi, Dennis Chang, and Dihong Lu, in collaboration with visiting scholar Keyun Zhang. Congratulations to the authors, this is a nice study that should prove useful to researchers describing new insect-associated nematodes.

A study done by recent graduates Kassandra Kin and Dr. Tiffany Baiocchi was recently published in Biology. The study investigates the behavioral response of several entomopathogenic nematodes to the odor prenol, which is associated with nematode-infected insects. Since performing this work these scientists have moved on in their careers:
After graduating from UCR in June of 2019 Kassandra has accepted a position at NYU’s Stienhardt Teacher Residency program. Tiffany graduated with her Ph.D. in June of 2019 and is currently working as a postdoctoral fellow at Cal State Northridge in the Hong Lab.

Dennis Chang and Tiffany Baiocchi walked and were hooded at UCR’s graduation this summer. They are the first graduate students trained in the Dillman Lab to earn a Ph.D. Dennis will defend his thesis later this year. Tiffany will begin her postdoctoral research in the Hong lab at Cal State Northridge later this summer. Congratulations! 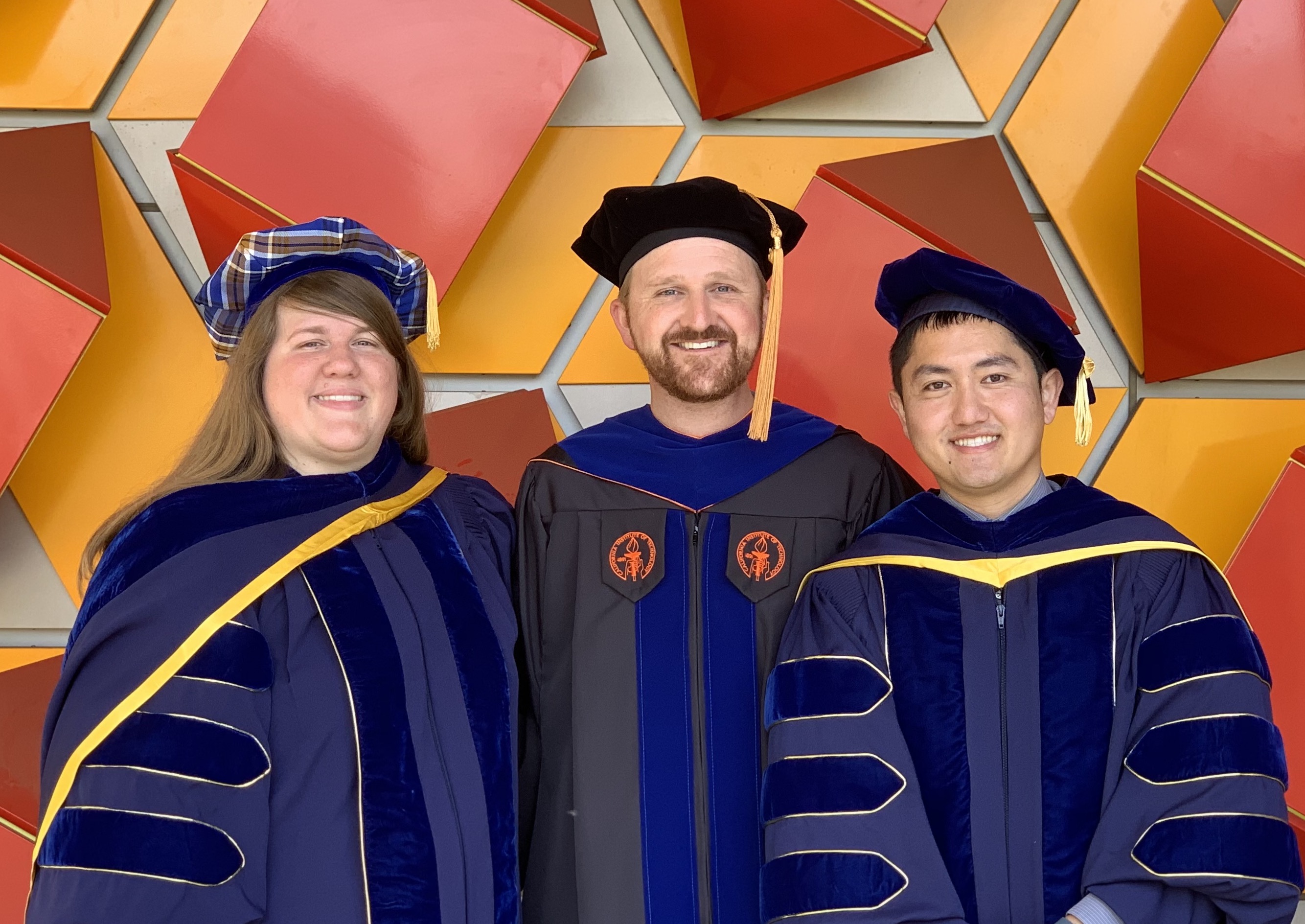 Tiffany Baiocchi, a graduate student in Biochemistry & Molecular Biology, and the first graduate student to officially join the Dillman lab is defending her thesis on Wednesday, May 29th at 1pm in the Genomics auditorium. We invite all to attend and support Tiffany on this momentous occasion.